We have been developing GDL substrate for three decades, building the capability, expertise and capacity to meet the forecast growth in fuel cell production.

TFP has been developing and optimising material for fuel cell GDLs since 1988, working alongside some of the leading companies in the industry.  This long term commitment to fuel cell development and growth has facilitated a comprehensive understanding of the necessary material characteristics to achieve a high performance GDL substrate.

The result is a range of carbon veils and mats which can be tailored to suit the requirements of both stationary and portable fuel cell systems. To date our nonwovens have been used successfully as GDLs in proton electrolyte membrane (PEMFC), phosphoric acid (PAFC) & direct methanol (DMFC) fuel cells.

In addition our subsidiary TFP Hydrogen Products also offer solutions for fuel cell technologies, ranging from catalyst powders to components for electrolysers which enable the generation of green hydrogen fuel from water electrolysis.

WHAT IS A FUEL CELL?

A fuel cell is an electrochemical device that combines hydrogen (or hydrogen-rich) fuel and oxygen to produce electricity, heat and water. It is much cleaner and more efficient than an internal combustion engine (ICE) as it does so without burning the fuel. Essentially more of the fuel is converted into electricity and less into heat.

The active components of a fuel cell are combined in the membrane electrode assembly (MEA), which is composed of an anode, a cathode and an electrolyte membrane. Hydrogen fuel is supplied to the anode, and oxygen to the cathode, via the bipolar plates. The anode is coated with a catalyst which accelerates the conversion of hydrogen to protons and electrons. The electrolyte membrane is selective to protons only, allowing them to pass through to the cathode. The electrons must move via an external circuit generating an electrical current and excess heat. At the cathode the protons, electrons and oxygen combine to generate a water molecule, the only by-product of the process. 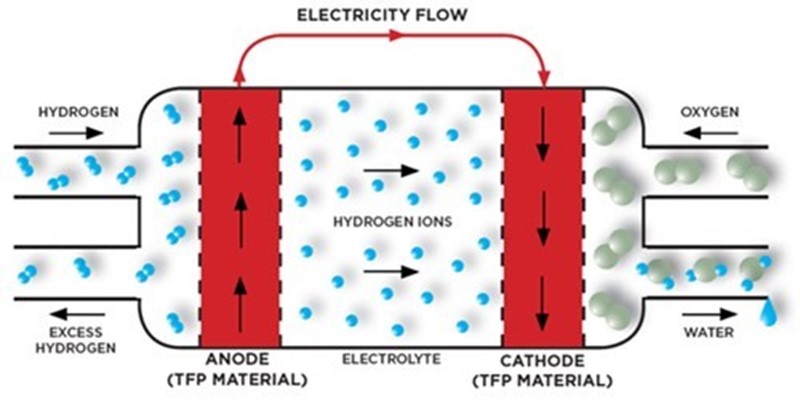 Individual fuel cells can be compiled to form stacks, which in turn can be combined into larger systems. This means that fuel cell systems vary significantly in both size and power, ranging from portable systems for transportation to large scale installations that provide electricity for high energy demand applications such as schools and hospitals.

THE BENEFITS OF FUEL CELLS

Fuel cells offer a number of advantages compared to batteries or internal combustion engines, these include:

Nonwovens which offer tuneable electrical conductivity for a wide range of applications.